We have all had that situation where you walk into a room or building and the air smells bad. It may be the smell of old food, a damp musty smell, or maybe the odor of a long-gone pet. One thing is for sure, the air just smells … stale. A properly designed space with good ventilation will not have this issue, as the goal of most conventional mixed air distribution systems is to create a well-mixed environment.

A mixed air system is one where the supplied air mixes with the room air, so that the resulting mixed air is at the room design temperature and humidity. When in cooling mode, the supply air is typically introduced to the space around 55°F at a high velocity. The high velocity supply air causes turbulence in the space, which results in the room air mixing with the supply air. The result is a room of nearly complete mixed air with hardly any temperature variation and uniform contaminant concentration (Figure 1). It sounds straightforward, but there is more to designing a mixed air system than just blowing air into a room. 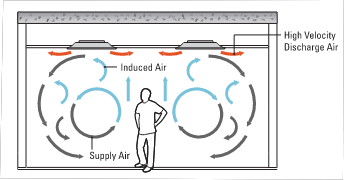 As air gets introduced into a space, there are two basic behaviors. One is the act of buoyancy – that is, colder air, being denser, tends to fall and hot air, being less dense, tends to rise. The second behavior is that air wants to move from high pressure to low pressure. A jet of moving air-typically has lower pressure than the air surrounding it. The faster that air is moving, the lower pressure it is. Air is also viscous, so the high velocity supply air introduced into the room will transfer momentum to the lower velocity air already in the room, thus inducing room air movement and promoting the mixing of the air, hence the mixed air system. These factors are what drive the science of room air distribution.

In most offices today, air is supplied from overhead air outlets. This air introduced along the ceiling is also subject to the Coanda effect (see Figure 2), which causes the air to stay along the ceiling’s surface. As the high velocity air moves along a solid surface (the ceiling), it creates a lower pressure region when compared to the room itself. The result is the jet of air moving along the ceiling, mixing, and entraining the room air as it goes, promoting better distribution in the room. This distance that air is projected from an air device before it slows to a certain velocity is defined as the throw (Figure 3). Most manufacturers report throws to air speeds of 50 fpm, 100 fpm and 150 fpm. These numbers are reported for isothermal air, which is supply air that is the same temperature as the room air. Isothermal air is more easily measured and is used for air diffuser performance index (ADPI). Warmer air typically has a longer throw than isothermal air, and colder air has a shorter throw. Take note that the throw is the distance that the air travels, so in the case of Figure 3, the throw consists of both the horizontal distance (A) and vertical distance (B) that the air travels.

Figure 3: Throw of an air outlet

Often the air supplied is at a lower temperature than the desired room temperature, around 55°F, so real world throws are typically shorter than what manufacturers report on their performance tables. If the throw of a diffuser is too short, such as at low airflow rates in cooling mode, the air may detach from the ceiling before it has had the chance to entrain enough air to warm up and mix enough with the room air. The result is the cooler air falling into the space, which is often called “dumping” or “excessive drop.” Dumping can often be felt in the occupied zone as a chill or a draft.

Dumping is not the only instance that may result in air entering the occupied zone with objectionable temperature or velocity. If multiple diffusers are installed in such a manner that their air jets collide along the ceiling, they can collide and drop into the space prematurely (Figure 4). Once again, this airflow can be felt and be undesirable for the occupants. In fact, the ASHRAE (American Society of Heating, Refrigerating, and Air-Conditioning Engineers) Fundamental’s Handbook recommends not exceeding 50 fpm for any air entering the occupied space to avoid this discomfort. Design engineers should take this into consideration and avoid having any jet of supply air entering the occupied zone with objectionable temperature or velocity. Luckily, manufacturer’s catalog data is readily available, and engineers can select devices that will have long enough throws at minimum airflows to avoid excessive drop and space those diffusers apart such that they avoid excessive collisions of thrown air. 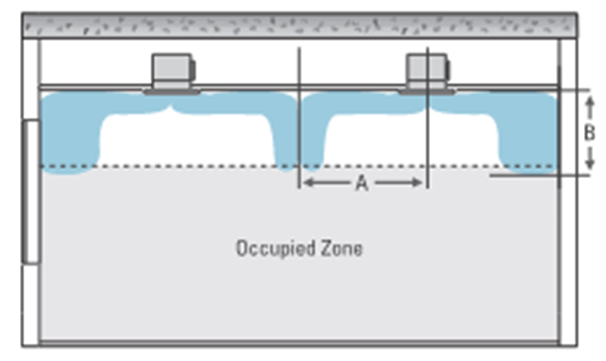 Figure 4: Air patters of two diffusers interfering with each other

There are more factors to consider when designing a system, such as sound criteria, occupancy and space usage, and cost. Whether you are an architect, engineer, or contractor, if you are laying out a mixed air system, your Brucker representative and Price Industries can help you design and implement an effective system to keep your occupants safe and comfortable for years to come. Be sure to reach out to them today for help with your next project.